I teach 6 classes and supervise 8 others per year. 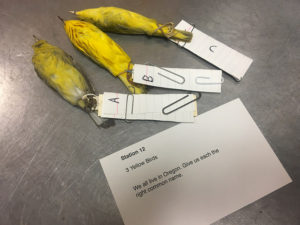 Systematics of Birds (on campus each fall)

Teaching has always been an integral part of my professional life. I began college-level teaching during graduate school. Since then, I have taught the following courses. The list makes me look much more educated than I really am. I know enough to know that I know very little.

Plus, graduate special topics courses on eight different topics have been taught.

From 2012 to date I also supervised 8 terms of e-campus courses each year to support two of my graduate students.

I present research at scientific conferences as well as at societies and festivals. I generally speak to the public about putting their birding knowledge to good use.